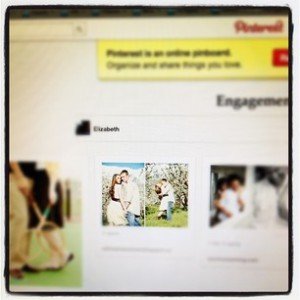 Pinterest.com is generating a lot of interest and has even been cited as a leading traffic generator to retail sites (great infographic), surpassing Google+ and growing at leaps and bounds, especially among it’s target: women.

If it is the new coveted platform for gathering images based around topics of interest, then why did Tiffany’s decide not to use it for their “What Makes True Love” use curated photo campaign but rather rely on their own platform?

The earliest implementation of web browser favorites or bookmarks, came in 1993 (Mosiac). Since then we’ve changed their name from Bookmarks, to Shortcuts, to Favorites, and back again. Bookmarks allow consumers to manage favorite sites and in aggregate companies could start to make inferences about behaviors and likes for individuals and eventually for specific demographics.

Pinterest takes this bookmarking one step further by both showcasing something specifically worth pinning (not a whole webpage like with a bookmark) and by allowing users to create  visually stunning pinboards of things that they find interesting and deserving of being shared with others.

“We found that it’s a great way to not only share info but also learn about our community. Pinterest allows us to see what trends and styles the community likes based on engagement – likes and repins,” said Nordstrom’s social media manager Shauna Causey.

Marketers are flocking to Pinterest and determining the best ways to utilize the platform to drive engagement. From contests, to focus groups, to cataloging like Nordstrom’s is doing, brands are attracted to experimenting within this very visual, very sharable platform. Using it as a source for inspiration, Pinterest is less about sharing with friends and more about sharing with those who share interests with you.

It seems then, that sharing True Love imagery and thoughts would be perfect for Pinterest. Tiffany’s does a great job really going beyond features and attributes to sell their products. In Rachel Lamb‘s Luxury Daily article, she quotes Chris Ramey, president of Affluent Insights who says “Selling product benefits is, today, a failed strategy. Tapping into your prospect’s deep-seated values and emotions is key.”

Tiffany’s “What Makes True Love” campaign certainly taps into those emotions and again aligns Tiffany’s directly with True Love and emotions. Their micro site covers True Love Stories, family heirlooms, songs by Paul McCartney and user curated photos inspired by sayings like “It was true love when…” The site also highlights the romance of New York by suggesting romantic places to go and seeing beloved places by their user generated content.

If Pinterest included a map feature so others could see where interests are most concentrated then perhaps Pinterest could have a prominent offline influence as well. Knitting clubs could pop up in small neighborhoods where none existing in the past, or retail stores could then know where to open their next door. Pinterest can learn something from Tiffany’s addition of physical destinations and inclusion of their romantic suggestions in NYC. Pinterest can curate users interests for meaningful trend analysis and future data.

Having said that, I’d still have liked to see Tiffany’s use Pinterest and other Social Media platforms to further experiment with their initiatives and drive engagement on more widespread platforms.