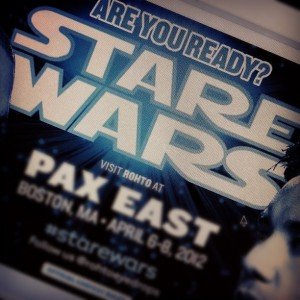 If you want to stand out and attract attention in the marketplace, target an audience where no one like you is participating.

I went to #PAXEast last week. For the uninitiated, it’s an amazing, intriguing and exciting exposition for all things gaming. From video games to board games – they have it all.

The trade show floor is a cacophony of collaboration: people from around the world playing games with their friends. They’re playing the pre-release versions of the greatest games from the biggest manufacturers. They’re playing board games and card games you’ve never heard of. They’re staring at computer monitors and cards trying to beat their opponents.

But one booth at the trade show stood out from everything else. One little booth had attracted a group of ten people standing around amused and bewildered. They weren’t selling video games or joysticks. They were selling eyedrops.

Rohto Eyedrops to be exact. Now I’m sure Rohto goes to lots of pharmaceutical trade shows and retail events, but at those shows they’re just another beauty product manufacturer. At PAX, they were an anomaly.

Sure they were giving out free samples, but they were also conducting a competition called “Stare Wars.” For a bunch of gamers who stare at a computer monitor for hours without blinking this was a matter of pride. Who could stare longer? After three days the winner was a gamer named Maxwell Morin. His stats: 54 matches, 3 hours 1 minute and 55 seconds total staring time. What does he win? A $1,500 gift card and a trip to PAX Prime in Seattle to defend his title.

Rohto isn’t trying to be the eye-drop for everyone. They showed up at PAX, embraced the audience and stood out from the crowd.

Why are you going to trade shows where everyone’s selling the same thing to the same audience?

What if you got outside your comfort zone and went to a trade show where you forced yourself to be relevant?